Thousands upon thousands of Americans are trying to spin up now and cram for the political exam that is upon them.  They've taken to the streets, protesting the Supreme Court overturning Roe vs. Wade.  That's nice.  I'm all for citizens exercising the "right of the people peaceably to assemble, and to petition the Government for a redress of grievances".  (Quick, where is that text found?)  Unfortunately, I don't see it changing the minds of at least half of the Supreme Court.  However, if those same people filled the room at the next County Commission meeting where they live, I bet it would make some politicians think -- and change their minds. 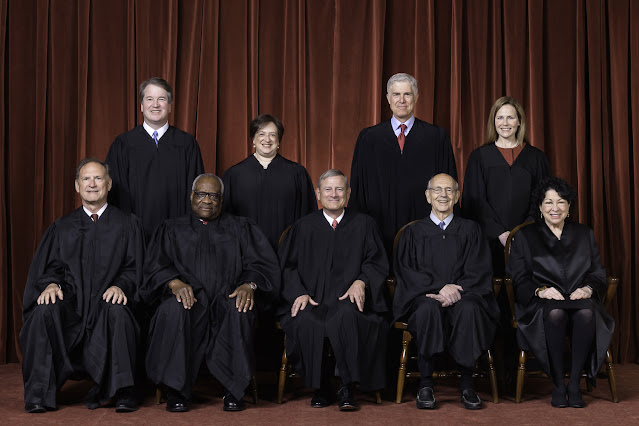 In case you are trying to get up to speed for your political exam:  All politics are local.  The  Supreme Court hasn't made abortion illegal.  It said the States get to decide if abortions are  legal or not.  That means it will be decided at your State Legislature and those guys usually start off as County (or City) Commissioners.  The Chairman of my county's commission will (in all likelihood) be my next Congressman.  We've never met.  I hold almost no sway over him.  He's a Republican.  I'm a Democrat.  You know who does hold sway over him?  All those Republicans (usually local businessmen) that have showed up at all those commission meetings for all these years.  (Ahem: And donated money to his campaign.)  He knows them.  He knows which ones have good ideas and know how things work.

That's what you're up against.  People that have a vested interest in showing up and making their thoughts known to the people that have the power to write and/or change laws.  Your boss' job description includes showing up where political decisions that affect his bottom line are made.  Yours does not.  So you don't show up.  And your voice is not heard.  It really is that simple.  Unless you're a zealot.

Yes.  A zealot.  A good, old-fashioned zealot with an unshakeable belief that they are right and their fellow man is wrong. I drive by an abortion clinic here in Huntsville, Alabama every week.  I see the anti-abortion zealots out there, sweating in the Sun, every time I pass by.  I do not see anyone asking me to pray to keep abortion legal.

I want to blow my horn at them and shoot them the bird.  But I don't.  I don't even volunteer to escort clients through the parking lot.  I just drive by.  You see, I'm not really mad at the people harassing young women walking through the parking lot. (Well, sort of.) I know, in their own misguided way, they believe they are doing God's work.  I'm mad at the people that wound them up and turned them loose.

I'm like you.  I don't want to attend County Commission meetings every week, make donations to politicians or sweat in the Sun, protesting the latest lame-brained idea from some zealot.  But that is how this "game" (I hate calling it that) of politics is played. And if you don't play, you will lose.  I hope that is becoming increasingly clear to you.

So, for now, it's time to show up.  I'm all for you changing the rules so that you don't have to show up but...you have to show up to do that too. The easiest place to do that is in your local City Hall and/or your County Commission meetings.  (Yes, you can do both.)  You need to find out which person in the room represents you and introduce yourself.  Tell him (or her) why you're there and have your say.  Sit back for a meeting or two, find out how things work and then start making things work for you.

I'd love for you to do the same thing at your State Legislature or even at the U.S. Congress.  But let's face it.  That takes more time and money than most of us have.

You'll notice I haven't said anything about joining a political party yet.  That is because -- if you are motivated enough to do what I've said so far -- you'll get there on your own.  Sooner or later it will hit you that you aren't the first person to get motivated and there are folks that already know the ropes.  Trust me.  They will welcome you with open arms.

All I will say about it for now is do not give a political party/organization your email address.  Or a phone number.  When you're ready to take that step, get yourself a politics-only email address and give them that one.  You can thank me later.  You'll have to figure out the phone number thing for yourself.  Just be advised, once it's out there in political land, it's out there forever.

(All this from clicking on a Trump ad once -- 63 emails in a week or so -- because I wanted to see what they were up to.  Trust me, Democrats aren't much better.) 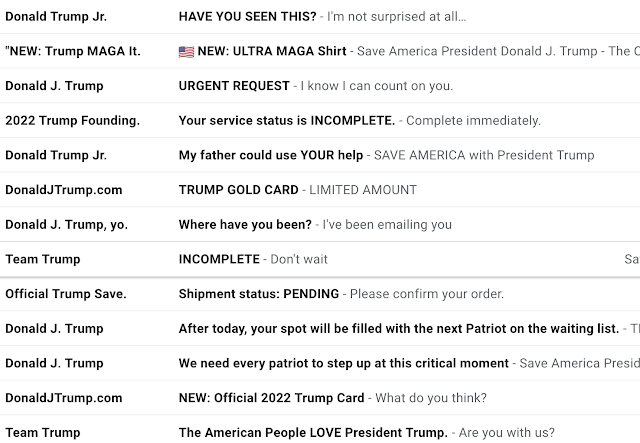 If you're expecting me to give you some kind of magic political trick so you don't have to show up at the local political party meeting or the county commission meeting, well, you aren't paying attention.  There aren't any tricks.  You have to show up.  Look at it this way.  You haven't shown up all this time.  How did that work for you?  Remember all those rioters on January 6th? 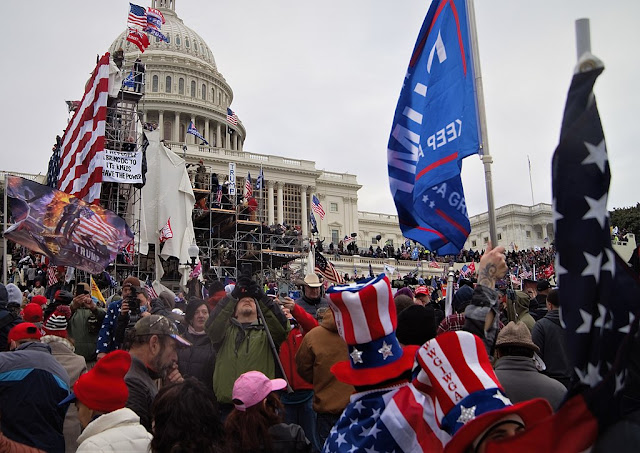 Tyler Merbler from USA, CC BY 2.0  via Wikimedia Commons
They showed up. They've been showing up.  And they've been donating money.  Why?  Because they are motivated.  You might want to ask yourself who motivated them.

And before you get off track and decide you want to imitate them...always remember, two wrongs don'tmake a right.  You have to find a lawful way to beat them.  Because that is what we do.  That is what makes us us and not them.

You'd better get busy -- if you want to have anything to celebrate in four years.  You're late to the Party.