Don't get excited. I'm not going to start writing for this blog again on a regular basis. I just have something to say and this is the way I have to say it.

As you can plainly see (assuming you're on the blog's main page), my last entry was nearly a year ago, on the momentous day of the PATCO strike. Today is a momentous day...only in my mind. Today is one year from the beginning of World War III. 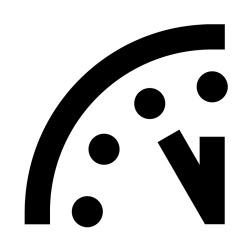 No, I haven't become a prophet in my old age, although I do spend more time at church. And speaking of which, I haven't become one of the End Timers. I'm not here to warn you of Armageddon and Christ's Second Coming. (It is odd those sort of folks take everything in the Bible literally except that part about no man knowing the date and time.) Nope. None of that. My warning is based on nothing more absurd than taking Santayana's quote -- Those who do not remember the past are condemned to repeat it -- way too literally.

Between the crash of Wall Street on October 24th of 1929 and Germany's invasion of Poland on September 1st of 1939 was 3,599 days. Any other idiot would be content to just call that 10 years and let it go. But I'm not your average idiot. I'm special. I calculated the days. (Which is seriously dumb when considering my poor math skills.) So, on the theory that history repeats itself, I added 3,599 days to September 15th of 2008 -- the day that Lehman Brothers fell, sparking the Great Recession.

Now, I don't expect Germany to invade Poland on July 24, 2018, but I expect some very dangerous times to unfold in the next year or so. Putting a date on it gives it some tension, some gravity, some urgency, that saying "in the next year or so" doesn't. So, I'm sticking with the date. On July 24, 2018, World War III will start. Pretend you believe it like an End Timer believes Armageddon will commence on that date. What would you do? Build a shelter? Stock up on food? Move to the Falkland Islands?

Could you work up enough enthusiasm to vote? To take 5 minutes out of your day and call your Congressman?

Think about how the Great Depression allowed the despots of the world to convince so many people that Democracy and Capitalism had failed. Think about how the Great Recession has allowed the same thing to happen. (You are forgiven ((at least by me)) if the name Donald J. Trump just flashed through your head.) I don't know if President Putin, given the right circumstances, could turn into the monster that Stalin was. But it's a theory I wouldn't want to test out. I hardly know anything about President Xi Jinping of China. But I do know he sailed his new aircraft carrier through the Taiwan Strait the other day and opened up China's first foreign military base in Djibouti. I don't know who the Archduke Ferdinand of Austria is for this century. (yes, I know that was the First) but I do those are only sparks. And sparks don't make a fire, they only start one.

The kindling -- the wood, the fuel -- is the millions upon millions of Greeks, Poles, British, Japanese, Australians and Americans that can't find a decent job and can't afford to buy even an indecent house. All they hear from politicians is "We can't afford to provide affordable healthcare, housing, education blah, blah, blah..." while in the next breath they promise another tax break to the wealthy.

Think about the public policies that lead to World War II. Are we replicating them today? Speaking of which, did you know Appeasement was a formal policy for Britain? I knew it was an attitude -- we'll trade land (other's land, like Czechoslovakia's) for peace. What I didn't realize was that it was actually a formal policy -- like "this makes good sense" policy. Does it make you think of Crimea? I hope so. America's policy of Isolationism didn't help matters then. Does it help matters now? Is Afghanistan getting better? Syria? Iraq? Would it surprise you to find out Saudi Arabia and India spend more on their military than France and the United Kingdom? Think on that for awhile.

Those with long memories remember that this isn't my first trip down this memory lane. I came up with this thinking model -- that the Great Recession was a repeat of the Great Depression -- a long time ago. Do you remember these words?

I hope that first sentence haunts you. It does me. Never in my wildest dreams did I think we were capable of electing a bully like Trump to the office of President of the United States.

What else are we capable of? You might want to spend a few minutes thinking on that, and what actions you could take to prevent World War III. Don't take too long. You only have a year left.